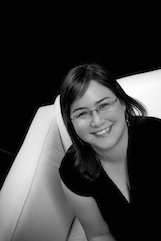 Jessica Wells was born in Florida, USA in 1974 and migrated to Australia at the age of 11. She completed her Bachelor of Music degree in Composition at the Sydney Conservatorium of Music in 1996 and graduated with first class honours. This was followed by a Masters Degree in Composition under Dr. Bozidar Kos completed in 1998.

After teaching composition at the Conservatorium for four years, she spent time living in Antwerp, Belgium and then returned to Sydney in 2003. She then completed a Masters in Screen Composition at the AFTRS (Australian Film, Television and Radio School) in 2005, and was awarded the Film Critic's Circle Award for "Best Display of Technical Excellence" for her work on eight short films.

Jessica's compositions cross many genres in the classical, commercial and film music worlds. She has worked for some of Australia's best composers as an orchestrator, arranger and copyist.

Her orchestral music and arrangements have been performed by many of the major Australian orchestras (SSO, MSO, TSO, WASO and QSO). Her work Ainulindale was commissioned by Symphony Australia for the TSO in 2001 and was nominated in the APRA Classical Music Awards for "Best Orchestral Work" in 2002. Many of her works have been recorded and broadcast by the ABC, including The Eight Immortals which was the only Australian finalist in the prestigious Alexander Zemlinsky International Prize for orchestral composition in the USA.

As a producer Jessica can bring out the best in orchestral recordings as well as smaller ensembles and jazz and contemporary musicians. She has arranged and produced the "Local Hero Saxophone Concerto" for acclaimed saxophonist Amy Dickson on her album "Catch Me if You Can", featuring a band of incredible musicians and the Melbourne Symphony Orchestra.

She also co-produces film recording sessions with composers, and is able to help them get the best performances and combinations of elements for delivery to the film mix.