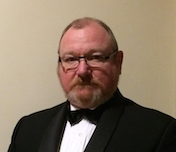 Ian is a freelance conductor, composer and arranger. He began his professional music career as a musician in the Australian Army. It was during that time that he developed his arranging skills.

He holds a B. Mus degree, majoring in Conducting and also studied composition with Malcolm Fox, Graham Dudley and Graeme Koehne.

In 1994 Ian won a scholarship to study Orchestral Conducting in Siena, Italy, winning the Opera Conducting prize. He also undertook studies in "Writing Music for Film" with Ennio Morricone.

Ian has been Conductor and Music Director for Opera, Operetta and Musical Theatre in Italy, Holland and throughout Australia and is in demand as a conductor of "new works."

Recently, Ian orchestrated and conducted a season of Opera entitled "Opera Goes West" comprising 3 one-act operas set in a wild west saloon. This presented quite a challenge, combining the disparate styles of "Two Blind Beggars" by Offenbach, "A Hand of Bridge" by Samuel Barber and "Blue Monday" by George Gershwin.

Ian has embarked on a project to compose an "Aussie" opera to mark the centenary of the Great War.